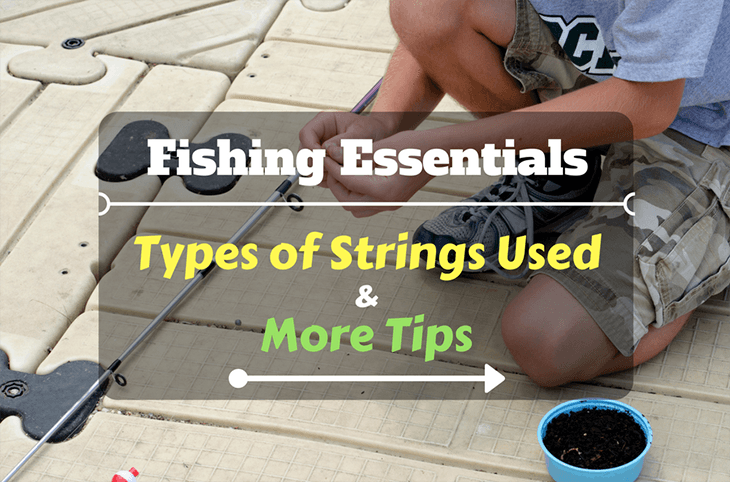 Fishing is one of the most popular forms of recreation, as well a means of making a living among people who live in large bodies of water, such as lakes, rivers, and oceans. These bodies of water are home to various kinds of fishes, with the abundance and the species of fish thriving greatly depending on the geographical location, climate, as well as the cleanliness of the body of water. In this article, you will learn how to tie braid to mono.

Whether fishing is done either for a living or for recreation, one of the things people would agree on is that it is an activity that entails a lot of preparations, from your apparel, the boat you’d be using, bait, and most importantly, the fishing rod. Out of all these, one of the aspects you have to put utmost consideration into is the string that’s used in the spooling of their fishing reels.

Having said all this, there is a wide array of strings you can choose from for use in connecting your fishing reels to the hook. Using an assortment of these strings may be necessary, given that different points from the reel to the hook may require different strengths. It is important, therefore, to know how ﻿﻿﻿to ﻿﻿tie a braid to mono, as well as other strings with each other. There are several kinds of strings commercially available, especially made for use in fishing, each of which having their own set of unique characteristics. These characteristics are brought about by the fact have varying chemical compositions. One has to put careful consideration in choosing the string for their fishing line, given that some are stronger than others. The following are the specific types of Strings that are used for fishing lines:

The history of the braid type of string could be traced back to the ancient, pre-historic times where people were believed to get fish using braided line or cotton with a hook attached to the end. This type, however, has evolved through the years, with it being subdivided into two broad categories, specifically the Spectra and the Dyneema.

The latter claims to be the most rigid of all the fibers in the world, and are braided down to the microscopic level, hence its strength. The former possesses similar characteristics with the latter, with trademark and copyright issues being the only factor to get in the way.

A lot of people greatly prefer monofilament over other kinds of fishing lines. The reasons for this is because it has a lesser tendency to slip within the knots you make, and is; therefore, great if you fish on a large scale. These are also translucent, and thus would be great as a means of catching fish better. It’s also known for its “memory-keeping” properties, which makes it effective for use in reels.

The Nanofil is basically made out of similar materials to that of the Braid, but it is not braided at all. The end product, therefore, is a very fine line and is connected on a molecular level. This is the thinnest out of all the materials for this particular use, and one of its greatest disadvantages is the fact that it would take a long time for it to fill an entire reel, and could hence be cumbersome to a lot of people. Another kind which is relatively heavier and denser than others is the ﻿﻿﻿fluorocarbon. This has a significantly less “memory”. This also has a similar index of refraction to that of water, which would most definitely help it seem invisible underneath it.

These properties also allow for a much lesser slack, thereby contributing to a much better, more hassle-free fishing experience. It does not have a great “memory” property to it, however, which would most definitely be a hassle on the reels.

Why Is Knowing These String Types Important?

It is important for anyone who is venturing into, or wishes to venture into fishing to know the different characteristics possessed by these strings, simply because they are often used in conjunction with each other. Some of these strings, specifically the monofilament are great at holding on to spools, which others, such as the braid, or the ﻿fluorocarbon ﻿are better off at the hook part of the fishing rod. This is the reason why these strings are of utmost importance.

How To Tie Different Knots

Given that these different strings have different properties, for them to be used together, we simply have to tie them up with each other. It’s important to note, however, that randomly tying them from one string to another would cause a lot of problems.

The following are systematic ways of tying different knots, as well as which knot goes with which kind of string. In learning how to tie braid to mono, one has to keep in mind that the how well-done your ties are could either result in you having the best time of your life catching fish, or you seeing your expensive hook drifting far away from you. Below are some of the most popular and reliable means of doing so.

Ways on How to Tie Braid to Mono To make a bimini twist, simply wrap the braided string around any surface, and then make 20 twists at the loop’s end. Get a knee to slip the open end, and make sure that steady pressure is kept on both loop ends. Afterwards, let the hand that is securing the tag end be lowered until this reaches the first set of twists. The loop angle is then opened, and roll the column of twists to its end.

Once this is done, make an overhand knot on the loop’s side to secure the entire thing, and make sure to keep the tension steady. Afterwards, secure the knot by making up to 5 hitches surrounding the loop, working from the loop to the end of the knot. Lastly, tighten these hitches and clip the tag end.

For a clearer video reference on how to make bimini knots, check out: This is another of the basic knots every fishing enthusiast ought to know, given that it could be used in virtually every fishing venture, regardless of water conditions. It could also be used to either attach one string type to another, or affix the string to the reel, or even for attaching the hook.

To do the uni knot, Make a double back parallel with the line after you run through the line of the hook, and create a loop by tagging the end of the double line. Afterwards, do 5 to 6 turns around the double line, and inside the loop. Afterwards, pull the tag end to tighten and compress the turns. Once you’re done, slide the knot down the eye, and leave a little loop if you want.

An easier alternative to the uni knot, and therefore one of the styles you have to learn how to tie a braid to mono. To do so, slip the end part of one cord through a one-line loop, and then wrap it around the loop. Afterwards, pass the end through the loop beside it.

The great thing about the Albright knot is that it does not need a lot of the braid materials for easier tying. One major disadvantage is that it might be too bulky for other applications, and in strong currents, the knot could come off and cause the hook to be detached.

For a more detailed set of steps in making an Albright knot, check this video out:

There are several other knot styles of various difficulties you can make use of in tying the braid to mono. These include the Bobbin Knot and the Slim Beauty Knot. These are more difficult than all the others, and might not be a good choice to work with for beginners.

When it comes to learning how to tie a braid to mono, you have to keep in mind that learning to tie knots the right way would most definitely require patience, as well as several instances of trial and error, just so that you can get the knots rightly tight.

Always make it a point to check the tutorials you can find abundantly online, or if not, check the pictures. If it does not seem to look like the knot it is intended to look like, then it’s definitely not done the right way, and don’t lose patience still if you have to do it over and over again.

All of the steps mentioned above proves that fishing is indeed, one of these hobbies or means of making a living that would entail a lot of preparations beforehand. When it comes to all of the preparations needed, tying the mono to braid tightly and securely is on top priority.

Because a poorly-tied knot would result to a terrible fishing experience, as well as several wasted hooks, as these hooks would simply fall off and disappear into the horizon instead of being able to effectively catch fish should it happen to drift away.