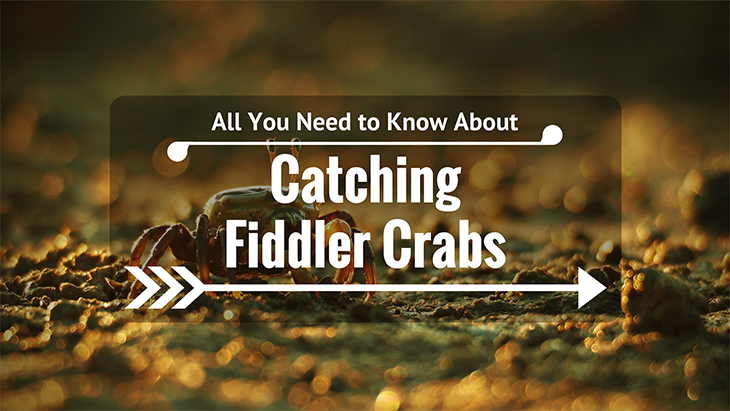 All You Need To Know About Catching Fiddler Crabs

Catching Fiddler crabs often make the difference between a normal and an awesome fishing day. I find fiddler crabs to be great bait, especially during the winter months when I usually catch a wide variety of species. At times, they are just so many I run and gun them around, scooping and putting them in my basket. Other times, there are so few of them around. Many often hide in their holes before they can be caught. Given the fast nature of fiddler crabs, catching them can be a difficult task. However, in case you are wondering how to catch fiddler crabs, here are some effective techniques I use to catch them.

2. Use a Light-colored Pail

Use a white or light-colored 1-gallon pail to catch fiddler crabs. The fiddlers will see the light-colored pail as a cooler surface and will be drawn to it. In addition, the pail will conserve your catch during hot days. If the trap on the door will be unattended for a prolonged period, consider putting holes or tiny slots at the bottom to serve as drainage.

When on the surface, fiddlers will try to respire air. This means that they can easily drown if the container is full with water. Therefore, I usually try to find the perfect spot with a significant number of crab holes. My best spots are usually the ones with small balls of sand.

Once I find a suitable spot, I excavate a hole on top of the high water, taking extra caution not to damage the mangrove roots. Then I bury the container, leaving a tip about an inch above the sand. Thereafter, I mix crusted fish, chum, and shrimp baits. It is important to mix the chum thoroughly with mud to prevent birds from eating it. Finally, I put the chum on the buried container.

Once I finish, I usually go fishing or swimming while I wait for fiddlers to fall into the trap. However, I make sure that I get the container as soon as everything is okay. I have seen some of my friends putting two-by-fours on the tip of the pail to catch little crabs. This a conventional, yet effective means of catching fiddler crabs. I use this method on a marshy side of the shoreline near the beach. Such places may have fiddler crabs running around the shores. Fiddler crabs also hide in sandy areas along the beach with small indentations. They like such places because they are cooler due to the wet sand.

Once I find such spots, I toss tempt the fiddler crabs by throwing chopped minnows and other foodstuff on the shoreline. This attracts the fiddler crabs, causing them to come to the surface. Once on the surface, the crabs usually gather in groups. Then I cast a net on the crabs, beginning with the ones in the largest groups. Once I catch some, I put them in a sizable container with layers of wet sand or mud.

I often use other types of containers to catch fiddler crabs. First, I find a suitable spot on the shoreline where I typically see fiddlers. I also look for typical fiddler clues, including signs of crab movement on the sand and tracks and indentations on the sand.

Then I dig a hole in the sand big enough to accommodate my container. Once the container is buried in the hole, I pack some orange or light colored dirt around its edges. Thereafter, I leave the container to trap crabs. I even leave it overnight at times. One of the best places to find fiddler crabs is the littoral zone; the area between the low and high tide mark. During low tide, small crabs leave their burrows and holes. During high tide, the crabs go back into their burrows. They usually plug the holes and burrows with mud to prevent water from entering. The tiny crabs are effective bait for catching other fish, including redfish, pompano, and black drums. One of the most important factors to consider when looking for fiddler to catch is their movements. Fiddler crabs are often most active during low tide. This is one of the best times to run after them and catch them quickly before the onset of the high tide. However, I have seen some who try to chase the crustaceans from their burrows.

You need to act fast and catch them before they run back to their burrows. Consider asking for help to catch the fiddlers. Although their massive claws may seem intimidating, they usually do not cause much harm. In fact, I usually pick them up with my hands. I often look for fiddler burrows when I do not want to chase after the fiddlers along the beach. I plow them up using my bare hands or a shovel. If you decide to use this method to catch fiddler crabs, be sure to replace the sand or mud you have excavated to avoid causing damage to the beach. I often catch fiddler crabs using simple traps. First, I explore the shoreline for signs of fiddler crabs. Then I dig a hole and put the trap inside. Finally, I put the bait inside the holes before moving away from the trap. I give the fiddlers some time to be attracted to the trap. At times, I put pieces of mesh or fabric in the mud and place the bait in the middle, then I sit and wait for the trap to work. Once the method becomes effective, I lift the mesh or fabric off the sand.

best financial planners - a couple of years ago

Hello! This post couldn’t be written any better! Reading through this post reminds me of my good old room mate! He always kept chatting about this. I will forward this post to him. Pretty sure he will have a good read. Thanks for sharing!

Lucas Bryant - a couple of years ago