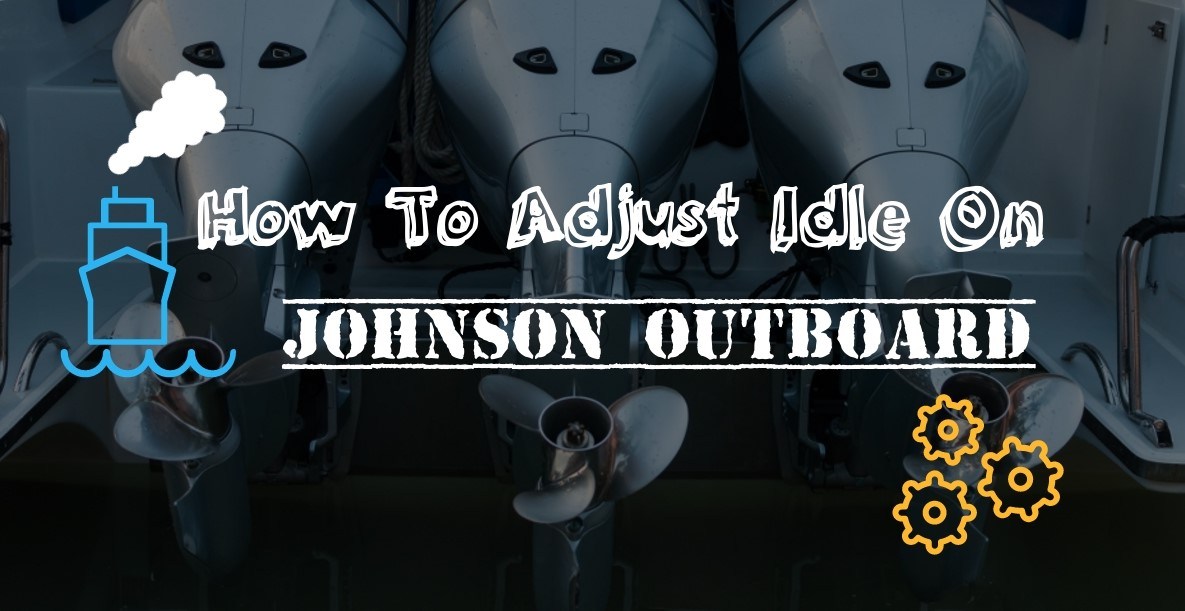 How To Adjust Idle On Johnson Outboard

Back in the day, the only means through which people travel across lakes, oceans, and other bodies of water used to be with the help of sails or oars. These sails would usually be made of thick cloths and various animal hide that are deemed strong enough to resist the strong winds.

While these were effective on their own, chances are, their voyage would solely depend on wind speed, and hence traveling from one point to another through the ocean would take a relatively huge amount of time.

When it comes to motors for sea transportation, the Outboard Boat Motor is the most common, given that it is a variety of motors that are specialized for use at sea. Apart from that, it’s popular because of its minimal maintenance. Regarding its operations, the idle phase is one of the most critical, and therefore something that needs proper adjustments to ensure smooth operations and longevity of the outboard motor. Having said that, this article would help to teach you how to adjust idle on Johnson outboard.

What Are Outboard Motors? Outboard Motors are a system employed as a means of propelling boats. This particular type of motor, specifically the Johnson Outboard, is popular for use in small boats that are used on a regular basis, especially the kind used for fishing.

They are also capable of providing control for steering, and its direction could be pivoted directly above its mounting, as well as allowing for thrust control. It is commonly installed on the transom, or the back end of any boat, and works by “pushing” the boat further away across the sea with the help of the rapid turning of the propellers. The reason for this is that their maintenance is the one which is minimal. It’s usually fixed and bolted onto the stern of the boat and is also a single machine which makes its installation a relatively easy process. While it has been perceived to be a thing of the past, with stern-drive engines becoming the more modern and popular alternative, stricter regulations imposed by regulatory boards have enticed bowriders to resort to them, with a resurgence in its popularity, given that its restrictions on use are significantly more lenient.

The Role Of The Carburetor Outboard Motors When it comes to adjusting the idle state on Johnson Outboard motors, the part involved would most definitely have to be the Carburetor. As with any other engine, this is the part which serves as the "combustion powerhouse" of every engine and works by blending air and fuel by employing the Bernoulli's Principle. This is basically what powers up your outboard motor and therefore, has to be cleaned on a regular basis for proper combustion to ensue.

With several months to a few years of regular use, these carburetors tend to be grimy and dirty, which could, in turn, be the cause of malfunctioning as well as noisy and ineffective operations. Having said that, there are several carburetor cleaning products available in the market nowadays. These cleaning products usually come in canisters, which allow you to spray air fast enough to remove all the dirt and grime that may have been accumulated. Should it be too grimy, however, one could make use of brushes to get rid of the dirt, but water should never be used.

Why Adjust The Carburetor? Apart from the obvious reason that the Carburetor has to be adjusted for optimal functionality of the boat, as well as to prevent future problems when it comes to navigation. The adjustments are usually and ideally performed once the engine is in "idle mode", which is characterized by having the engine being operational despite the device not running. This particular mode is one which is available on both car engines and Johnson outboard motors. Apart from allowing your boat to navigate more smoothly, it also allows for more fuel efficiency, given that once your idle mode has been adjusted to the point of being enabled, you would not have to worry about your engine dying all of a sudden in the middle of the sea, and having to restart the whole engine, the initial thrusting of which would cost you so much fuel to do than transition to movement from idle mode.

The adjustment process is not difficult in its entirety. While maintenance would entail cleaning up with the use of specialized cleaning products when it comes to adjustment on idle mode, one would only need the following devices: There are several kinds of screwdrivers out in the market nowadays. It is one of the most common and most basic tools that are part of just about every single toolbox. For use in adjusting idle Johnson outboard motors, it's best to choose one which is neither too big nor too small; the former could get in the way and scratch or damage nearby parts, while too small of a screwdriver would most definitely result in a poor or difficult adjustment.

In choosing screwdrivers, it’s also best for one to make use of the magnetic type, to lessen the burden associated with falling screws, and it’s also perfectly ideal for anyone to make use of those screwdrivers with rubberized and firm handles. Having a rubber grip would allow you to have much better control of the screw, given that these parts might be poorly oiled and therefore, difficult to turn around. A tachometer is a device that allows you to check the rate of each engine, specifically in RPM or revolutions per minute. The ideal speed or RPM rating varies from motor to motor, and the Tachometer is the only way for you to do so. While some people tend to simply listen to their motor and turn the screw until the "right" sound is heard, it's always best to double-check or verify. Connect this to the vacuum gauge which can be found on the Tachometer.

1. Turn The Engine On This is the first, most obvious step for you to adjust the idle of your outboard motor. The mechanism through which devices could be turned on would depend on whether you employ a yanking mechanism to start the engine up, or whether you use the keys, the latter being the more common mechanism. Make sure that it’s set to neutral, or in such a way that your propeller would not be moved. Make sure that the entire boat remains as stationary as possible.

2. Check If It Is Idling Properly The “correct” idling rate is the one which varies from engine to engine. Depending on your Johnson Outboard Engine, it would vary from unit to unit, and the ideal rates are often indicated in the manual. For these engines, it is ideally set at 600 to 850 RPM. If your motor falls either below or above the level indicated in the manual, then it’s most definitely best for you to adjust. Otherwise, maybe minimal cleaning or maintenance in other aspects would suffice. To begin the idle adjustment, after you have turned your engine on, the next thing you have to turn the idle screw, one which is usually surrounded by a spring and found at the lower part of the Johnson Outboard Motor. Loosen it by turning the screw Counter ClockWise, which is one turn to 1 and one-fourth.

4. Keep On Turning And Listen To The Engine Once this has been accomplished, continue turning it counter clockwise, or loosening the screw, until the engine seems to be dying out. This is expected and is a result of having too much air and fuel in the mixture. After achieving this, the next thing you have to do is to turn the opposite side until the air becomes too much In the mix, and this is characterized by the backfiring and stuttering sounds, again, like it’s going to die out. From this point, you may then loosen it up again, from ¼ to as much as ½ of a single rotation of the screw.

There are many things you have to keep in mind when it comes to adjusting your idle modes. This is of utmost importance, given that this mode may determine the efficiency of your motor. If you want to be more fuel efficient, and if you want your motor to last much longer, then you might as well adjust it on idle on a systematic schedule.

i have an 80 hp johnson that idles very high when started, its a 1971 . any tips on how to adjust the idle?

Has anyone ever been to Southern Vape Escape Ecigarette Shop in 1815 W Indian School Rd?

The Vape Store - a few months ago

Does anybody know whether Vapers Juice store located in 485 Route 1 South offers e-liquid made by Fragola Pazzo (Crazy Strawberry) eJuice? I have tried sending them an email at at [email protected]