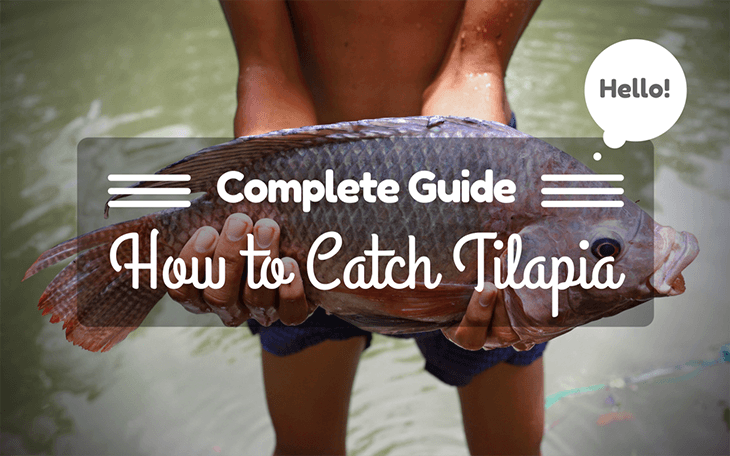 Complete Guide for How to Catch Tilapia

Tilapia is a type of fish mainly found in fresh and brackish water. This type of fish is becoming an increasingly popular culinary feature in many hotels and restaurants. Tilapias are known for their white and delicious flesh. They are known to be natives of Africa and the Middle East but have been introduced into several places outside their natural habitat including a number of states in the U.S with warm waters. Tilapias are classified as herbivores. It can be quite difficult to learn how to catch tilapia because they are rather shy. Catching them will require your best angling skills.

5 Things You Must Know Before Fishing There are two main reasons why tilapia may be attracted to bait: hunger and to protect their territory. Using live is one of the most effective ways to catch tilapia. Tilapias are very territorial during their fry-rearing season and spawning. During this time, Tilapia become aggressive to virtually anything that comes closer to their spawning beds.

Tilapias normally spawn for unlimited periods. They can spawn until water temperatures decrease below 60 degrees. This will give you ample time to draw lures near their spawning beds. Chances of catching Tilapia with a reel and a line drop abruptly after the spawning period. Most Tilapias prefer spawning in shallow waters with a lot of vegetation to offer cover from other fish and predators. It is very easy to locate the tilapia spawning beds. The beds look like craters swathing in the river bottoms or ponds. Tilapias are very nervous, therefore avoid getting too close to their beds. Tilapias mainly feed on plant foods like corn and peas. They can also be lured by bread balls because they are some of the best and most effective baits for starving Tilapia. Use man-made lures that look like small fish or invertebrates if you want to take advantage of their territorial instincts.

It is important to consider using light tackle because Tilapia is a relatively small fish. Arm yourself with a 6 or 7-foot long, lightweight spinning cast with a rotating reel. Tie your reel with 4 to 8 pound test monofilament line and number 4 hooks.

Keep What You Catch Although some people prefer using catch-and-release methods for most game fish like trout and bass, anglers are encouraged to keep and cook all the tilapias they can catch. Tilapia can be territorial. In addition, they can easily colonize their habitats. Tilapias are known to eliminate other fish in their habitats causing imbalances in the ecosystems of their habitats.

This species of fish destroys the vegetation composition of rivers and ponds that they live in. This is one of the main reasons why anglers are encouraged to keep the tilapia fish that they catch to keep their populations in rivers, ponds, and lakes in check. Nevertheless, catching tilapia is not easy and requires a very light tackle because tilapia is very wary and has good eyesight.

Things You Will Need:

Fishing License In Some States Right Of Entry To Open Freshwater A Can Of Cheese Spread Look for tilapia in slow-moving and shallow water in sub-tropical and southern regions. Other good strategies include fishing from the banks and slow trolling in a boat along the beach shores. Attract tilapia using earthworms and night crawlers. This can be done by attaching a live worm to its collar. Shove the barb through the other side and leave the hook uncovered.

Do not go deep into the water. Cast near the shores where there are a good number of sea structures including dead shrubbery, rock formations, and immersed branches. Mark your position using a bobber float. Move on to another area if one spot does not result in a catch after several casts. Use different baits or design your super bait by yourself. Make bread balls using old and wet bread with a substantial amount of cheese spread from the can. The cheese spread will give the bread balls some taste and allow them to last longer on the hook. Your hooks will still pass through the bait easily and hold up well in the water. Use artificial lures to attract tilapia. Avoid deep-diving crank bait with a metal, spoon-like lip and jigs because they are not safe during hot summer months. Gently cast the line for the fish to strike.

How To Catch Tilapia

Below is the standard operating procedure (SOP) for Tilapia fishing:

Fish pellets are some of the most effective baits for Tilapia. It is important to prepare your baits at home or at least one hour before fishing. Do not soak your pellets for long. In addition, avoid adding lots of water in your pellets.

Allow the pellets to soak for 5 to 10 minutes. Flooding your bag of pellets will make them expand too rapidly, turning them into a soggy heap of glop. Pour some hot water into the bag of pellets and shake it gently to wet all the pellets. Pour the water away after a minute. Allow the pellets to expand for about 30 minutes. The main aim is to allow the moisture to get into the center of the pellet so that it becomes spongy and soft. Pour your pellets in some ground bait powder, also known as dedak and mix it well. This will add some flavoring to your bait. Using an umbrella rig is one of the most effective ways to fish tilapia. The umbrella rig has to be prepared at home or purchased at tackle shops. However, I prefer to make my own rigs at home because it gives me the added satisfaction of catching fish with my own home made rig.

You can also use other less complicated rigs with single hooks and floats although you will have to use small floats, very thin lines, and tackles. Ensure that you use U﻿ltra light tackles, 1000 size reels, 8 to 12lb mainline, 6ft rods, and a transparent mono. Take the soaked pellets and throw a handful into open waters at least 5 meters from the shores and banks. Wait for tilapia to appear, but if they do not show up or feed within five minutes, throw another handful of pellets.

Do not use excessive amounts of burley to avoid wasting your baits. This is the point where you have to practice a lot of patience. Cast your bait out near or at the center once the feeding frenzy begins. The closer you are to the frenzy the better for your fishing.

Tilapia will be eating the floating pellets one at a time. It will only be a matter of time before they get to your bait. You have to strike after a second or two once the float dives. Some tilapia will even hook themselves without setting it. You may have to use some force to reel in your catch once the fish is hooked up.

When Is The Best Time To Catch Tilapia? Spawn time is characterized by perfectly circular and deep, dish-sized holes on the shores and banks. Male tilapia make holes and then find female tilapia to bring them back to the hole where courtship commences.

You can catch tilapia during this time using small crankbait lures and small crappie jigs. Tilapia mostly feed on plankton and small living creatures. Green algae and other plants are some of the best tilapia foods.

Please let us know the fishing techniques you use to catch tilapia in the comments section. You may also share this article with your friends and followers on social media.

Maxwell - a couple of years ago

Hi there,
Thanks for the wonderful tips on reeling in tilapia. Am new to the game so i very much appreciate your many tips on the subject. Am yet to buy my first gear so any recommendations will help out a lot. Thanks

It took weeks to look for the info you have mentioned above and it is a real blessing to find someone as enthusiastic about this subject as
myself. What I am attempting to say is that the value of this problem can’t be hesitated.
Individuals who raise it are worth appreciation in spite of the fact that I, personally,
don’t fully share your own views. Anyhow, thank you for sharing your own expertise!